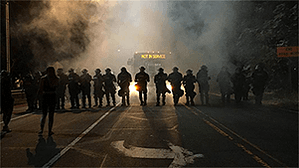 The recent events that have unfolded in Charlotte, North Carolina are unsettling and disturbing. A man was shot and killed by police, which brought out protesters and in some case rioters in the Queen city, the largest city in North Carolina. A modern city wich is a banking hub and home to sports franchises, the Carolina Panthers (NFL) and Charlotte Hornets (NBA) as well as home to NASCAR.

This was just the latest in a string of violence between the police and black men over the last several years where black men have been killed by police officers and it has been on social media, filmed on camera phones, played out in the media and lead to protest in the particular city where it took place. This has lead to a divided nation and no trust between the police officers and the communities in which they serce.

I am not going to take sides in this debate, only offer a few thoughts and points that I feel might be getting overlooked. First off, the police do need to be transparent. If the person who was shot in Charlotte, Keith Lamont Scott, was holding a weapon and refused to put it down after the officers repeatedly told him to then the shooting was justified in my opinion. If he had no weapon as his wife claimed and was just sitting in his car, then this was manslaughter by the cops and should be prosecuted in a court of law.

I have the utmost respect for the men and women in blue. They go to work every day not knowing if they will be in a situation such as the one the officers were in Charlotte were in. I don't think the police are intentional murderers. I do think they are known to use excessive force that is often unnecessary and this often disproportionately involved people (mostly men) who are minorities. This has gone on for years. Everyone of my generation remembers Rodney King ad the beating that took place at the hands of the LAPD that was caught on video back in 1991-1992. This was a disgusting display of force and misuse of authority and the fact that the cops were acquitted lead to the LA riots back during the same period.

The cops aren't perfect, but by-and-large they are trustworthy and do what they are supposed to do with civilians which is to protect and serve the community that they belong in. I know I wouldn't want to do their job which is one of the toughest careers in the United States.

Trust will only come when there is better communication between the police and the black community. Passing laws that will facilitate non-tranparencey and delays in finding out the truth of what actually happened in these incidences is only going to make matters worse.