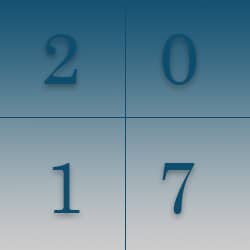 We recently passed the halfway point in 2017. While this year has gone by fast, it has not gone by well for me thus far. I had great dreams and ambitions for 2017 which have not materialized. Not yet anyway.

At the start of January everyone has great hopes for the year ahead. Everything is new, the year is ahead of us and we can start over (at least for a while). I know I had great hopes for 2017, but the year started off bumpy and quite frankly has been a "Debbie Downer" for me thus far. I won't go into full details but so far this year I have dealt with loss, depression, anxiety, doubt, excitement, disappointment, bad luck and a lot of soul-searching.

Despite the fact that the first half of 2017 has been a bummer, doesn't mean it can't end up being a solid, if not a great year. There is still plenty of time to turn things around and I am an extremely positive glass half-full kind of person.

One of the biggest sports stories so far in 2017 was the come from behind victory by Tom Brady and the New England Patriots to defeat the Atlanta Falcons in the Super Bowl after being way down in the first half. The team could have easily folded and given in to the Falcons and their huge lead. After all the Patriots had won multiple Super Bowls prior and had nothing more to prove. However, being the champions that they are, the Patriots fought back. They did not give up.

I am not a big Patriots fan by any means (I was actually rooting for the Falcons in the 2017 Super Bowl). I am a fighter though and respect and admire other fighters. My plan for the remainder of 2017 is to be like Tom Brady and the Patriots in the second half of the Super Bowl and fight my way to victory!