I'm with her, because I am certainly NOT with him! 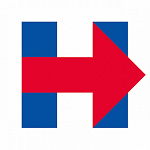 I am probably never going to be the biggest Hilary Clinton supporter. I tend to vote Democrat, but she has never been my favorite. I think she did a good job as Secretary of State and was admirable as First Lady, but my choice of the Democratic nominee would be stronger towards Joe Biden if he decided to run or Bernie (Feel the Bern) Sanders.

It's not that I don't trust Hillary. Email scandal aside, I think she is trustworthy, intelligent, experienced and she would be good with diplomacy and for the most part, make good decisions as POTUS.

Her opponent, Donald J. Trump, on the other hand, would be a disaster as President. He is brash, insulting to women, minorities, people with disabilities and when it comes to foreign affairs he is just plain ignorant. He has no plan if he becomes President other than that he will "Make America Great Again". No he won't! America is already great. There is no need to make America great again. He will make America terrible and will incite violence, promote racism, make poor decisions, will piss off all of the leaders of other countries, probably start World War III and might end civilization as we know it.

Back in 1990 after I graduated from college I went to Atlantic City New Jersey and stopped in Trump casino. it was pretty sleazy and has since closed. I also stopped at Trump tower in 2001 on a trip to New York City. It was a nice building, but kind of pompous just like the person the building was named after.

Trump does real estate and fires people on reality shows. He should stick to real estate and television and stay in New York City where he belongs. Washington D.C will be Hillary's new place of residence once November 2016 rolls around.

One comment on “I'm with her, because I am certainly NOT with him!”